Home INDUSTRY NEWS An A* Roofing Student Proves His Talent 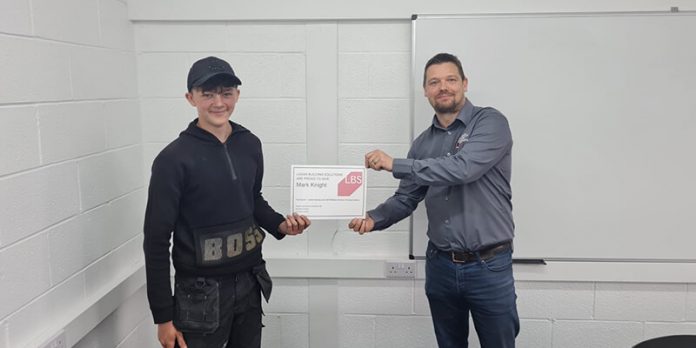 Mark Knight, 15, is proving himself as something of a roofing protégé.

Mark, who is home schooled, has been gaining work experience and doing training as a roof slater and tiler. And he’s taken to it like a duck to water, according to his tutors and ‘bosses’.

Mark, who lives in Stockport, Manchester, first gained some work experience by going to work with his father, Danny, who is a joiner by trade, on various construction projects, some of which were roofing.

Danny explains, “It’s the roofing work that Mark has really enjoyed. It seems to have captured his imagination.

“Mark hated school, that’s why we took him out of it. He’s severely dyslexic, but some teachers just treated him like he was naughty. That’s why it’s so great to see him find something he’s not only passionate about but is really good at too. He’s found his niche.”

An A* Roofing Student

As Mark’s interest in roofing deepened, Danny and Mark’s mother, Debbie, wanted to encourage him with some more formal learning. Danny offered to help with roofing rig joinery work for free at the National Construction Training Service/Master Roofers Academy in Salford in exchange for training for Mark.

Stewart Rowles, the Academy’s Roofing Manager and Trainer took some persuading, considering Mark’s age. He wasn’t sure at first that the youngster would cope with day-long training sessions alongside adult learners. But as soon as he saw Mark’s enthusiasm and determination to develop his skills, Stewart changed his mind.

Allowing Mark to take part in the lead bossing course, Stewart was quickly impressed by what the teenager could already do as well as his attitude to learning.

“To be honest”, says Stewart, “Mark kept up with the adults he was learning alongside, and in some cases he did better. His lead work was really impressive. He picked it up so quickly, he’s obviously got a talent for it. He soaked up every bit of learning we could offer him like a sponge.

“If they did roofing in a school, Mark would be an A* student all the way!”

So impressed with Mark’s work was Stewart that he offered him a discounted Introduction to Slating course that Mark was keen to do. With his grandad Mark (who is also a roofer) paying towards the course cost, young Mark completed the first week of the course with flying colours.

Mark Chandler at Natural Slate suppliers, Lagan Building Solutions – which supplies the Training Academy with slate – was also so impressed with young Mark’s work that he paid for a second week of training.

Mark was not only able to learn basic tiling and slating methods and techniques, he went further in the second week, creating a slate diamond pattern that any roofer could be proud of. Now Mark wants to learn to be a qualified roofer and work in the heritage roofing sector.

Mark’s time at the training centre culminated in the gift of a bag of roofer’s tools from the Master Roofers Academy worth £400.

Stewart adds, “I don’t think it will be the last we hear from him. With the support Mark has and his enthusiasm and talent for roofing, I think the sky’s the limit.”

Now Mark is doing extra work experience with Cavan Maguire at CM Roofing in Astbury near Congleton. Here Mark can focus on roofing work, reinforcing what he learnt during training and gaining further skills from a specialist. Dropped off and picked up by his parents when Cavan is working near Stockport – sometimes up to a two-hour round trip – Mark has excelled at every task Cavan has set him.

Cavan reports Mark is very enthusiastic, always reliable and eager. Cavan comments, “Mark is a breath of fresh air to be honest. He’s hard-working, asks all the right questions. He is a very keen learner – it’s not like he’s on his phone every five minutes like a lot of lads his age or older!”

“He wants to complete every task to the best standard he can. He does everything that’s asked of him and more.”

Cavan is so impressed with Mark that he has also contributed towards the cost of his training.

For the future, Cavan adds: “Now Mark needs to be careful to do his research and apply to the right companies that treat their apprentices well. Learning with Stewart will be one of Mark’s greatest assets – it will benefit him and of course any company he goes to.”