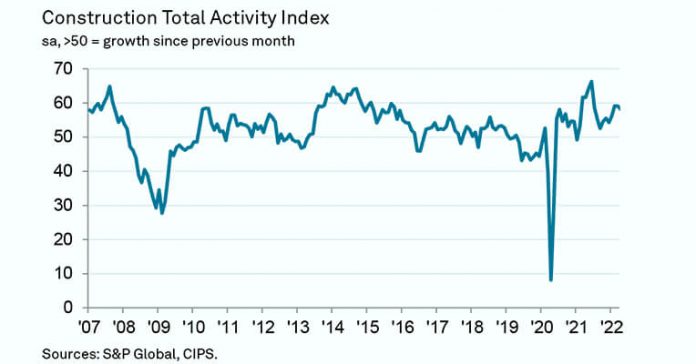 Survey respondents noted that higher costs and worries about the economic outlook had started to act as a brake on demand.

Signs of a slowdown in client spending contributed to another drop in growth expectations, with the degree of optimism about future workloads the lowest since September 2020.

At 58.2 in April, down from 59.1 in March, the headline S&P Global / CIPS UK Construction Purchasing Managers’ Index (PMI) – which measures month-on-month changes in total industry activity – signalled the weakest rate of output growth since January. The index has nonetheless posted above the crucial 50.0 no-change mark in each month since February 2021.

Residential work remained the worst-performing sub-sector in April and saw the greatest loss of momentum in March.

The near-term outlook for construction activity deteriorated in April as total new order volumes expanded at the slowest rate for four months. Escalating raw material prices and, in some cases, hesitancy due to higher borrowing costs and geopolitical uncertainty were reported as headwinds to demand.

While tender opportunities diminished in April, the need to deliver forthcoming projects and rebuild business capacity contributed to another round of job creation in April. Moreover, the rate of employment growth hit a three-month high.

A strong pipeline of construction projects and efforts to boost stocks where possible resulted in a steep rise in purchasing activity. Higher levels of input buying have been recorded in each month since June 2020.

Suppliers once again struggled to keep up with demand for construction products and materials. Around 45% of the survey panel reported longer lead times, while only 2% noted an improvement. The resulting index measuring suppliers’ delivery times across the construction sector signalled a sharper downturn in performance than in the previous month.

Supply chain delays were attributed to shortages of staff, materials and transport, with these difficulties often exacerbated by delays at ports and the war in Ukraine.

Higher prices paid for energy, fuel and raw materials led to a steep increase in average cost burdens during April.

Survey respondents also noted that the removal of red diesel subsidies had pushed up costs. The overall rate of purchasing price inflation accelerated to its fastest since September 2021.

Looking ahead, the percentage of construction companies forecasting an upturn in business activity during the next 12 months (43%) continued to surpass those expecting a fall (12%). The gap narrowed again in April, however, and as a result the Future Activity Index dropped to a 19-month low.

Tim Moore, Economics Director at S&P Global, which compiles the survey said: “The construction sector is moving towards a more subdued recovery phase as sharply rising energy and raw material costs hit client budgets. House building saw the greatest loss of momentum in April, with the latest expansion in activity the weakest since September 2021.

“Commercial and civil engineering work were the most resilient segments, supported by COVID-19 recovery spending and major infrastructure projects respectively.

“Construction companies have built up strong order books since the reopening of the UK economy, which led to another round of rising employment in April and these project starts should keep the sector in expansion mode during the remainder of the second quarter.

“However, tender opportunities were less plentiful in April as rising inflation and higher borrowing costs started to bite. Consequently, longer-term growth projections have slumped from January’s peak, with business optimism now the weakest since September 2020.”

Duncan Brock, Group Director at the Chartered Institute of Procurement & Supply, said: “A slowdown in output growth amongst builders in the UK has highlighted a number of issues to be concerned about including rising costs, shortages and a hesitancy amongst customers.

“New order levels rose at the slowest pace since the end of last year. There were fears around disrupted supplies as 45% of supply chain managers reported longer lead times. To counteract some of these challenges and with an eye on the future, supply chain managers were building stocks resulting in another sharp rise in purchasing activity.

“Inflation hit the highest rate since September 2021, impacted on budgets and made customers think twice about committing. Job creation grew quickly to complete work in hand, risking over-inflating capacity should new order growth slow further. With the Bank of England confirming the interest rate as the highest for 13 years, the squeeze on business lending also led to a relatively gloomy outlook amongst builders for the year ahead, with sentiment the lowest since September 2020.”

Brendan Sharkey, Head of Construction and Real Estate at MHA, said: “The UK construction sector continues to ride a wave of strong demand. However, construction work is now less profitable due to inflation and interest rate rises. Russia’s invasion of Ukraine continues to be responsible for some staggering prices increases. We’ve seen the price of certain raw materials surge by 20% or more within a month.

“Hopefully employers and larger construction firms will be sympathetic to the struggles of smaller businesses. If they are not, we may see more than a few casualties. In the long term, the sector may experience a decline in new civil engineering, commercial and industrial projects as businesses and investors start to hold back on new orders until price stability returns and there is more economic certainty.

“Housing is a bright spot, especially outside of London. Despite the cost of living crisis, housing demand shows little signs of slowing, boosted by high levels of employment across the economy. The rising cost of living and of increasing mortgage costs will surely start to bite soon, but even then demand for new build homes should continue to be strong.

“The government can do very little to support the sector at this time. Now would be a good time to reassess delivery models to identify potential cost-savings. Firms also need to be vigorous in negotiating and renegotiating contracts. Rampant inflation means a job that looked profitable one month will be loss-making the next.”

Stephen Marcos Jones, CEO of the Association for Consultancy and Engineering (ACE) said: “We are hearing stark warnings – the OBR outlined a poor outlook for the rest of the year in the Spring Statement, and only yesterday the Bank of England shared its views that surging inflation could trigger a recession. While we need to be wary of self-fulfilling prophecies, we do need to recognise that we are now in choppy waters and the immediate post-pandemic optimism, which positively impacted on construction figures in 2021 and 2022, has now started to dissipate.”

“The conflict in Ukraine is leading to further pressures on materials and the supply chain, fuelling inflation and an increase in project costs. We need to ensure this doesn’t negatively impact on the pipeline by encouraging public clients to push on through with committed projects – and in some cases to bring them forward – to support the industry through what will undoubtedly be challenging times ahead.”

>> Read more about construction data in the news.