Dating back to 1894, The Marine Hotel is a luxury 89 room hotel in Troon on the Ayrshire coastline with views over the Firth of Clyde and the Isle of Arran. It sits on the edge of the historic Royal Troon Golf course, the nine-time host of The Open Championship, overlooking the 18th hole.

In 2019, the owners of the hotel announced major work that would see both the interior and exterior of the building restored and refreshed. Internally this included every guest room and all public areas. Externally, the windows, stonework and roof would be refurbished.

Having worked with the hotel to address previous issues with the roof, Glasgow based John Fulton Plumbing and Roofing submitted a plan for the renewal of the slate roof and leadwork. Also in the plan was a comprehensive overhaul of the existing stone façade and the installation of new sash and case double glazed windows.

With the support of CUPA PIZARRAS, the John Fulton team put forward CUPA Heavy 3 as the ideal alternative to Scottish slate. The dark grey, 7-8mm thick Heavy 3 slates closely replicate the colour and thickness of the original slates, as well as the characteristic pyrite crystals often visible on the surface. 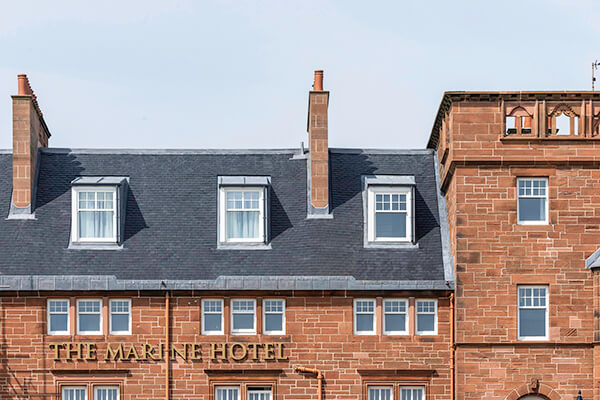 The slates were supplied in CUPA PIZARRAS’ Random format and laid in diminishing courses to replicate the look created by the traditional roofing methods. This approach, sometimes referred to as random roofing, was the result of many Scottish quarries producing slates in varying dimensions and thicknesses to maximise the use of the quarry output. This led to the practice of laying the roof in diminishing courses, with the largest slates at the base of the roof and smaller ones laid near the ridge.

While modern production techniques mean this is no longer necessary, CUPA PIZARRAS’ Random allows this effect to be recreated by including a selection of slates from across its range of available sizes.

The Marine Hotel is a Category C Listed Building as it is a notable example of the work of Scottish architects, James Salmon and John Gaff Gillespie. Therefore, any changes to the building, including the choice of materials, had to be reviewed and approved by Historic Environment Scotland (HES).

“We had worked with CUPA PIZARRAS slate on many projects before where a traditional look was required,” said Martin Mcguinness, Roofing Manager at John Fulton. “The hotel’s owners looked at previous examples of where Heavy 3 had been used and were satisfied it would achieve the aesthetic they wanted. Also, because the product has been used on a number of heritage projects in Scotland, gaining HES approval was straightforward.”

“The relatively complex design of the roof, with approximately 25 different roof areas, and the hotel’s coastal location meant CUPA PIZARRAS’ 100-year warranty was important in giving the client true peace of mind about the quality of the slate and its ability to withstand the test of time.”

Allan Liddell, Specification Manager at CUPA PIZARRAS added: “The Marine Hotel is an iconic building in the area and we are proud to have been part of its refurbishment. As demonstrated on this project, Heavy 3 offers an excellent solution to the challenge of replacing traditional Scottish slate roofs. It also meets the highest modern standards through our commitment to quality, traceability and minimising the environmental impact of production and transportation.”

The refurbishment of the roof began in June 2019 and was completed in July 2020. The hotel remained open throughout the work until it was required to temporarily close due to measures put in place to control the spread of COVID-19.

Supply Chains are Failing as Shortages Take Their Toll on  SMEs