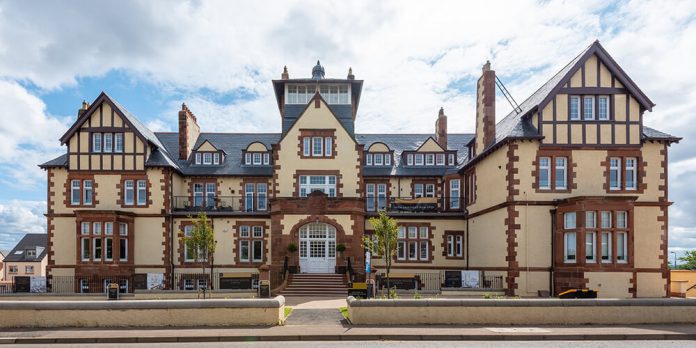 Held at the Grand Central Hotel, Glasgow in November 2019, the CUPA PIZARRAS project, submitted by roofing contractor Avonside Roofing, won the Slate Roofing award for the refurbishment work carried out on Henderson House.

Built in 1899, Henderson House was originally Gullane, Scotland’s iconic Marine Hotel. Built close to the railway line terminal, the hotel was a hub for seaside visitors. Since it’s time as a hotel, the building has been requisitioned by the army during WWII and used as a Scottish Fire and Rescues Service college.

In 2019 the property was restored to its former glory by Cala Homes, renovating the building into 21 bespoke apartments forming one-bedroom to three-bedroom duplex residences.

Part of the refurbishment included the renovation of the roof.

After establishing that the existing slates were not salvageable, Avonside Roofing recommended CUPA PIZARRAS’ Heavy 3 slate as the ideal replacement for the slate previously used on the property.

The judges at the NFRC Scottish Roofing Contractor Awards commented: “The Henderson House project was a well-executed strip and re-slate to what has proved to be a stunning refurbishment of an iconic building.”

Allan Liddell, Specification Manager at CUPA PIZARRAS commented: “We were delighted that Henderson House won the award. At CUPA PIZARRAS we are dedicated to providing high quality products for every project and this is just another example of this.

“However, a product is only as good as its installer and Avonside Roofing achieved a really excellent finish on this project.”

Business as usual - including 2 day delivery

Did your Mini Velux Alan make it Round the Course?