THE EASTERN REGION ROOF Training group has named its apprentice of the year as part of National Apprentice Week.

Awards were given out to students that had shown exceptional skill, behaviour and dedication to their craft, with an award also given out for the Apprentice Employer of the Year.

Clive Coote, tutor, said “its been a pleasure to celebrate national apprenticeship week again this year and give out awards to those we feel have gone the extra effort.

The employer’s award was given out for the first time to highlight the company that not only provided the best support for their apprentices on programme, but their support for Apprenticeships in Roofing on the whole.

The training group also expressed its thanks to manufacturers Soprema, Axter, Midland Lead, BMI & Klober for their support. 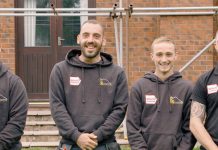