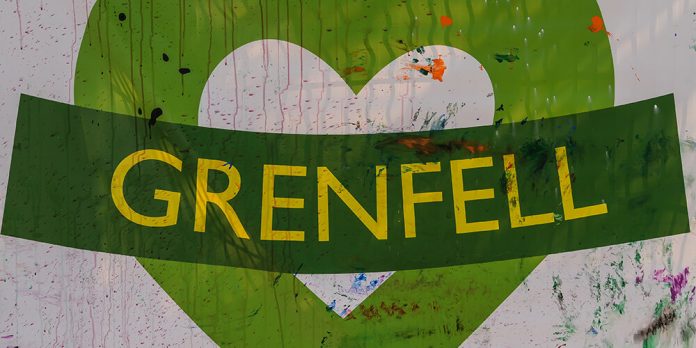 THE GRENFELL INQUIRY HAS heard opening statements from the refurbishment project’s external façade subcontractor, alongside its architect and main contractor.

The statements have been given as part of the beginning of Phase 2 of the inquiry, with installers Osborne Berry, manufacturers Arconic Architectural Products and Celotex, as well as cladding machining company CEP Architectural Façades all set to give evidence today, alongside fire engineering consultants acting for Studio E, Exova.

Harley’s statement covered its history in getting involved in the project, from informal meetings with Studio E Architects in September 2013, its translation of Studio E’s design, and its responsibilities.

Those responsibilities in design were to “Determine sizes and thickness of panels and types, sizes and number of fixings to suit backing wall and the layout and details of supporting steelwork,” with the company stating the choice of materials was the decision of the architects.

The company then managed Osborne Berry: “highly experienced installers with whom Harley had worked for many years.”

On the products chosen, Reynobond and Celotex, the statement reads: “Whilst Harley did not play a role in deciding what materials should be specified
or used, in light of the information available in respect of the Reynobond ACM
and the Celotex RS5000, no one at Harley was concerned about the use of these
materials.

“This was not only because they had been specified within the NBS,
but also because both Alcoa (now Arconic) and Celotex were globally trusted,
respected manufacturers.”

“No such guidance was ever brought to the attention of Harley.

“Had Harley been aware of such guidance, it would not have used Reynobond with a PE core in the facade of Grenfell Tower.

“Indeed, since the fire Harley has become aware through disclosure of CSTB classification reports that when it tested the Reynobond ACM in 2015 it obtained only a European Class C classification when in a riveted system and only achieved Class E (European class) when in a cassette system.

“This was something that Harley were never made aware of at any time by Alcoa.”

Studio E Architects’ statement sets out that it believes the whole regulatory system was not fit for purpose, with data from product manufacturers’ data having “the effect of misleading designers”.

It goes on to say that it “did not have any knowledge at the time of the Project that the products used on the Tower were unsafe, and it could not reasonably have been expected to know that they were not safe;”

On the post-contract phase, it continued: Studio E’s role during the post-contract period included coordinating the detail design of others, including the engineers and specialist subcontractors, liaising with Planning and Building Control to achieve statutory approvals and responding to site queries.

“However, Rydon made clear to Studio E that it tended not to use its architects as much as other contractors may do and it was envisaged that Studio E’s role would be more responsive, with Rydon maintaining a greater degree of control over the design process than Studio E would normally expect from a Design and Build contractor. As such, Studio E’s overall level of involvement decreased over time.”

It continued: “The subcontract package for which Harley was responsible was specialist in nature and Studio E could not identify technical errors in the designs and I or specifications of these, specialist, disciplines. Harley was Rydon’s subcontractor to which, Studio E understands, Rydon had delegated its design responsibility for the cladding façade. Studio E therefore considers that Rydon was responsible for approving Harley’s designs.”

Rydon was appointed to the project on 11 March 2014 by the local authority.

Its statement said: “Having taken on a contractual responsibility to its employer relating to the design of the project, a D&B contractor such as RML will seek to ensure that the architect, other professionals and any other specialist subcontractors it engages are in turn responsible for carrying out their design and build work to the appropriate standards.

“Harley had been involved in two projects involving Rydon companies prior to the Grenfell Tower refurbishment. Both involved the use of PE ACM rainscreen cladding.

Rydon stated it expected its cladding contractor to have input on building compliance.

The statement continued: “Harley provided a quote to RML on 29 January 2014 for “the design, supply and fix of a complete envelope package, all in accordance with the Clients Requirement Documents”. 5

“In accordance with the NBS Specification, Harley provided prices not only for Proteus HR zinc honeycomb panels, but also for the alternatives named in the specification, including Reynobond Duragloss 5000. Harley’s quotation formed the basis for that part of RML’s tender relating to the cladding system.

“A Harley witness acknowledges that it is normal practice for the façade contractor to consider compliance with the Building Regulations. Indeed Harley was, pursuant to clause 2 ·1 ·1 of DOM 261 under a contractual obligation to do so. This was the case regardless of the fact that the design team and Building Control would be considering the same thing.”