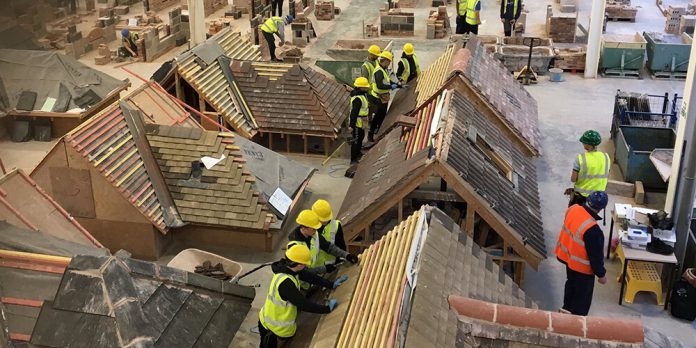 Following the success of its roofing apprenticeship taster days in June, Leeds College of Building’s (LCB) roofing department has announced it will be welcoming more prospective students in the new year.

Students began their day with talks from department staff about the course itself and what is expected of applicants. As the taster day progressed, attendees were issued with full PPE before being introduced to a range of roof tiling tasks in the colleges bespoke workshop.

Verge to verge tasks were on offer for those who wished to participate. Department lecturers supervised pupils as they tiled the verges with plan tiles, before stripping the verges back again and neatly stacking the tiles back into storage bins.

CUPA provided goodie bags for all of students which were handed out before an afternoon of tutorial-based learning that covered other courses available at the college.

Chris Messenger, who supervised the students throughout the day, said: “I enjoyed training the year 11 students, even if it was only for a short time. If I have managed to place roofing as a possible apprentice choice for even a few of the students that attended then the event was worth it and I look forward to the next taster day.”

The next taster day will be held on Friday 5th February. Registration is now available on the LCB website.