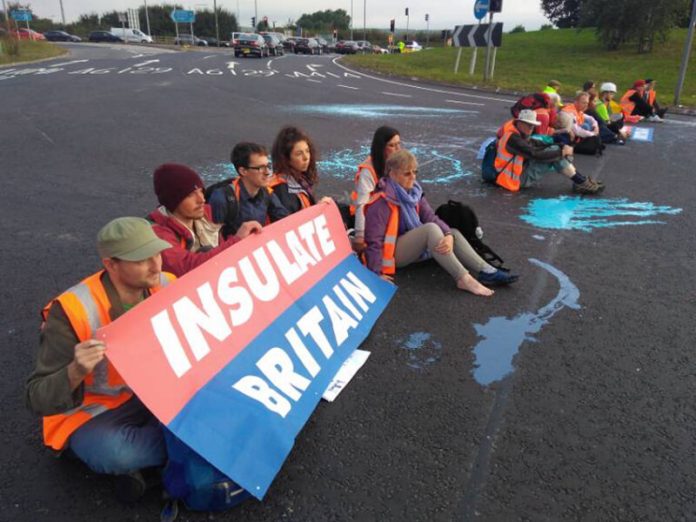 THE GOVERNMENT has had an interim injunction granted to National Highways today to stop the Insulate Britain M25 protests.

Activists will be in contempt of court if they breach the terms of the injunction. They can be punished with up to two years in prison and an unlimited fine.

National Highways intends to return to court to extend the injunction and potentially seek additional powers of arrest.

Transport Secretary Grant Shapps said: “We will not let these demonstrators wreak havoc on our roads, disrupt thousands of people’s journeys and put lives in danger.”

Pointing out that civil disobedience seems to be one of those things that is only popular when it is in the past, Annie, 63 retired from Dorset (the granddaughter of a Suffragette) said: “Joining these actions has been an incredibly hard thing to do, but we’re not expecting to be popular.

“It is a fact that now 2.5 million homes in the UK are in fuel poverty. It is a fact that children in poorly insulated and cold homes already struggle with their homework and it is a fact that the parents of these children have to make a choice between heating or eating. In my opinion, in Britain in the 21st century, that is totally unacceptable.”

Insulate Britain protestors have staged a series of protests over the past week. They have blocked the M25 which is one of the UK’s busiest motorways.

Yesterday the campaigners blocked the M25 in both directions near Junction 10 as 38 people joined the fifth round of protests. There have been 338 arrests in total during the protests which started last week.

One of those arrested, Len Herbert, 65 a retired engineer from Dorset said: “I would rather not block roads, but for years I have participated in every other form of activity to try and get our government to take notice of the climate and ecological emergency. But they continue to ignore the scientists. Insulating homes is a quick win to reduce carbon emissions and would hugely help this and reduce bills for those in fuel poverty.”

>> Read more about Insulate Britain in the news