THE NORTH WEST ROOF TRAINING Group (NWRTG) is getting ready for its annual ‘Apprentice of the Year’ event at the Roofing Workshop at Bolton College.

Taking place in the middle of UK National Apprenticeship Week on 5 February, the event is supported by Welsh Slate, which is donating a bespoke trophy; and Midland Lead providing prizes to the finalists.

Tasks on the day are yet to be announced, but as Welsh Slate is donating a crate of slate and Midland Lead a special delivery of lead, there are some clues about what tasks might be planned.

Already lined up as independent judges for the competition, are Claire Griffiths, Editor of Roofing Today, and Stewart Rowles of Church Castle & Cottage, Chester.

The three winners of the heats taking place the day before will compete in the final, and NWRTG has also arranged school visits and have-a-go sessions for students. Employers will also be attending.

Bolton’s Roofing Workshop is now working to full capacity and Luke O’Gorman, Senior Tutor for the past 18 months, is working tirelessly to improve quality. If you’re looking for a place in September’s intake of roof slating/tiling apprentices, now’s the time to make a reservation.

Looking back to 2019, a year when the North West was the leading region for contract awards in the UK, it’s clearly had a marked effect on training. Other than mandatory training, member companies have simply had other priorities, for the most part, despite a large amount of funding from CITB being available to cover costs.

With two months to go before the end of CITB’s financial year, NWRTG can still support training for members who are registered with CITB, meaning they achieve zero cost for training. 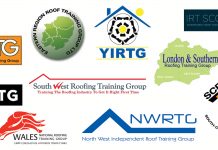