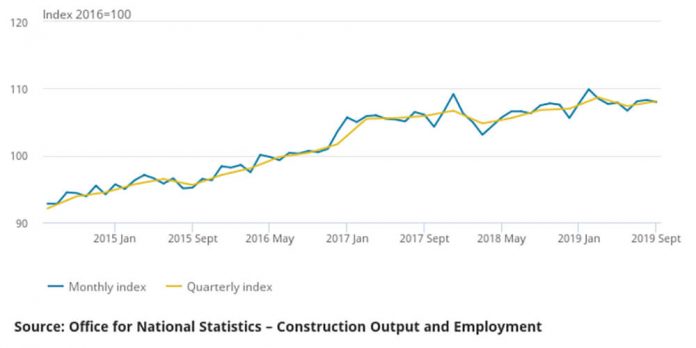 CONSTRUCTION OUTPUT increased by 0.6% during the three months July to September 2019 (Q3), compared with the previous quarter, partially reversing the decrease of 1.2% in Quarter 2.

Over the longer term, the industry has experienced a slightly positive trend in growth in the all work series since the start of 2017, however this is markedly slower growth in comparison with the period prior to 2017.

In the month of September, construction output decreased by 0.2%, reversing the 0.1% growth seen in August 2019. The industry has experienced a mixed profile of monthly growth since the record high of £13,869 million recorded in the monthly all work series in February 2019. Falls in March, April, June and September have largely been offset by increases in May, July and August. The level of construction output in September 2019 is now £238 million (1.7%) below this record high.

In new work, most sectors saw an increase with private housing (1.8%), private commercial (1.5%) and private industrial (7.2%) contributing significantly to the rise in Quarter 3 2019.

In repair and maintenance, the fall in Quarter 3 2019 was driven by a 3.0% decline in private housing and to a lesser extent a decline of 0.3% in non-housing. 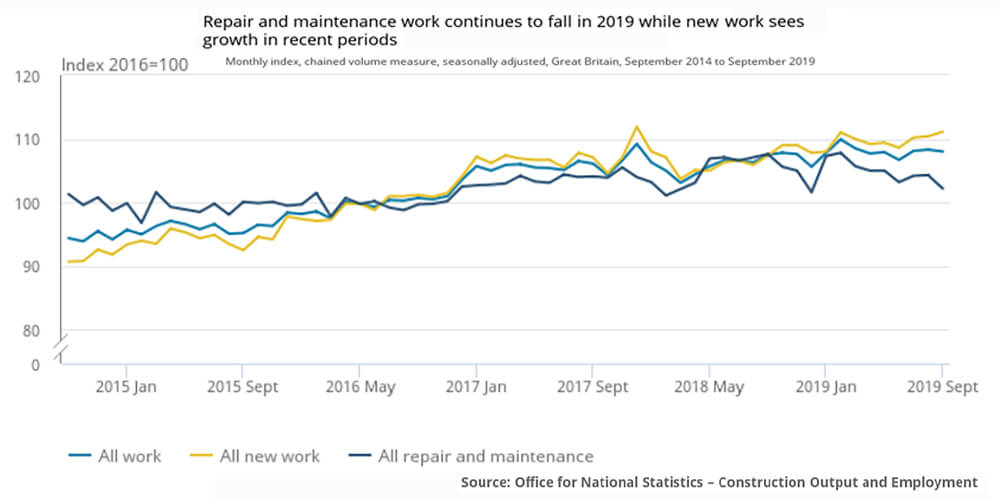 Brian Berry, Chief Executive of the FMB, said, “OfficeHomeowners are holding off upgrading and improving their homes due to political and economic uncertainty. The increase in construction output seen in Quarter 3 masks the fact that the repair and maintenance sector has contracted, the bread and butter sector of the construction industry and one which keeps thousands of builders active and in work. This contraction in the private domestic sector even led to a fall in output in September, compared to the previous month. The UK has some of the oldest housing stock in Europe, that urgently needs upgrading. At a time when the Government has set an ambitious target of net zero carbon by 2050, we need to be rolling out energy efficiency measures across our existing housing stock, full steam ahead. The uncertainty is holding us back.”

Berry concluded: “In order to boost consumer confidence, the new government must create a National Retrofit Strategy that sets out how to encourage home owners to upgrade England’s housing stock to the highest levels of energy efficiency. This will not only help reach the 2050 target, but will also address the scourge of fuel poverty which puts a strain on our educational institutions and the NHS. We need to urgently reverse the decline in the repair and maintenance sector which keeps so many builders active in the industry.”

“They show an increase in new work over July to September, and in particular higher than expected increases in housing, commercial and industrial new work, but a slowdown in September itself.

“We expect this slowdown to continue over the next few months, especially given last month’s confirmation of a further delay in Brexit.

“Business and investors hate uncertainty, so the continuing saga of if and when the UK leaves the EU, plus the added unpredictability of the general election, means there will be a continued reluctance to commit funding to new projects.

“We also need to see the major parties make strong policy commitments to boost the housebuilding programme, which is failing to deliver the number of homes required to meet the housing shortage.”

Construction Output Fell for First Time This Year in June 2022

Join Rainclear at the National Self Build & Renovation Show in...