THE ROYAL INSTITUTE of British Architects (RIBA) is reporting increasing levels of confidence amongst its architect members in its latest  RIBA Future Workload Index.

The survey of member practices took place in October, before the announcement of a second lockdown in England.

The workload index continued to hold steady, returning a balance figure of +9.  While almost half (49%) of practices are expecting workloads to remain the same in the coming three months, 30% expect an increase in workload, and 21% expect a decrease.

Confidence has been slowly growing among practices of all sizes, with medium and large practices returning positive balances and a notable increase in positivity compared with September. Reports of personal underemployment are decreasing, and workload levels continue to be on the up. The outlook for future staffing levels is also improving. Workloads now stand at 90% of what they were a year ago.

This improving picture is a result of a strengthening private housing market and optimism about future work for practices outside the capital.

Among the four different work sectors, private housing continued to be the only area anticipating growth – returning a balance figure of +12, softening slightly from last month’s figure of +17. The commercial sector continues its slow recovery, rising 3 points to -12 and the community sector rose 5 points to -11, up from -16. The public sector rose by one point to -4.

RIBA Head of Economic Research and Analysis, Adrian Malleson, said:  “The next few months will be critical for UK architects. How the government negotiates Brexit, how the pandemic is managed, and how government spending promises are realised, will all directly affect architects’ workload. The extension of the furlough scheme into 2021 has stayed the potential budget crisis of increased salary cost without any commensurate increase in revenue.

“The commentary received in October suggests a rise in enquires and commissions, particularly for smaller residential projects. Others describe particular difficulties, with work in the hospitality sector in particular, stalling.

“There remain significant concerns about the course of the pandemic and the lack of clarity on Brexit. We continue to be on hand, providing support and resources to our members as they navigate these challenging times.” 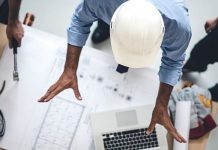 MEWP Load and Unload Training Revamped in Response to Accidents