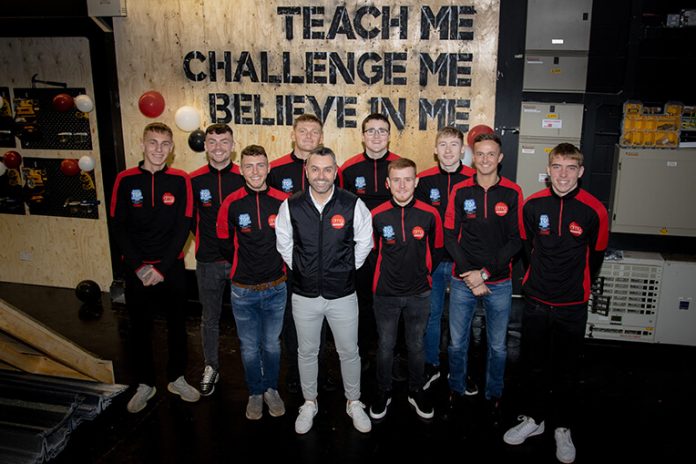 THE DMG ACADEMY of ROOFING was officially opened yesterday (8 December) to provide introductory training to those interested in a career in roofing.

The DMG Academy of Roofing located at Strathclyde Business Park in Belshill offers modern facilities with roof training rigs, tools and materials and a separate classroom area with video presentation and digital resources. It opens with a first cohort of five trainees who will learn about the construction of pitched tile and slate roofs. They will attend the academy every day for four weeks before progressing to a roofing apprenticeship.

The training facility is the brainchild of Darren McGhee, Managing Director of DMG Services Group in Glasgow. Together with wife, Kerry whose background is in education, Darren sees the Academy as a way of offering an introduction to a high-quality, skilled and well paid career in roofing to those age 17 years and above.

“I was lucky; my father got hold of me at 16, when I didn’t know what I wanted to do, and said ‘come on you’re going to be a roofer’. I don’t know where I would have ended up otherwise. And roofing has been a great life for me. I want to offer that to youngsters – boys or girls – and show them they can build a good life too, with high wages and a healthy lifestyle”, said Darren.

“I want to help people to see just what an attractive career they can have as roofers. I want them to aspire to become professional roofers and take pride in their work as part of a team.”

Candidates can be school leavers or older people seeking a change in career. The training offered at the Academy will provide an insight into what is involved in a career as a roofer, as well as making participants aware of career development routes to becoming a professional, qualified roofer and eventual management positions.

Kieran Gray, 19 and Adam McGill, 18 are amongst the first cohort of trainees. Kieran had started work as a labourer with another roofing company in the locality but was about to leave roofing being uncertain of how he could progress. He said “I met Darren, liked the company and everything about it. We’re shown how to do things properly and treated with respect as learners. There’s a great chemistry in the team and we’re learning to become professionals.”

For those trainees who wish to take up the opportunity, Darren will recruit them as DMG Roofing apprentices and they will attend South Lanarkshire College – which is ten minutes away – to study in weekly blocks for an NVQ level 2 in Roof Slating and Tiling and SZCQF7.

Ross Hepburn, Roofing Lecturer at South Lanarkshire College said: “The DMG Academy is very impressive. It will give a great start to anyone wanting to find out more about a roofing career. It will help to professionalise the industry and overcome any negative misconceptions about roofing.

“It’s a win, win for all parties involved. The new recruits will see what a great industry roofing is to be a part of; DMG and eventually other roofing companies will get a pipeline of motivated and industry ready apprenticeship recruits; and the College will help to build on their enthusiasm and skills to develop professional, qualified roofers.”

South Lanarkshire College’s Roofing department has seen a huge increase in its roofing apprentice numbers in the past four years since Ross has been in post. The department is currently training over 70 roofing students, with 33 apprentices in the latest cohort.

Ross adds, “We’ve worked with Darren on the Academy for some months now and we will continue to provide feedback and help develop ideas to meet the needs of students and employers.”

The opening was supported by several industry representatives, including Simon Dixon, Head of Training at the NFRC who has helped in getting the Academy established, Anne Leeson, Head of Marketing from Hambleside Danelaw which will be supporting the academy with materials, and Paul Lambert, Field Technical Support at Hambleside Danelaw, who has already conducted a CPD with DMG Academy students on the morning of the opening.

Allan Liddell and Hannah Wall from CUPA PIZARRAS also attended, announcing that they be supporting the DMG Services Group ‘Apprentice of the Year’ and ‘Employee of the Year’ programme, by providing the winners of both with an all-expenses paid trip to their quarries in Spain.  They will also be arranging support and slate materials from the company.

Darren McGhee is also the Managing Director of MyRoofcare and is the 2019 Screwfix Tradesperson of the Year.

>>Read more about roof training in the news