March data revealed a setback for the UK construction sector following five months of marginal business activity growth. However, survey respondents noted that unusually bad weather conditions had been a key factor behind the drop in construction output, with snow-related disruption having a particularly negative impact on civil engineering projects.

Meanwhile, business activity expectations and job creation both picked up in March, which provides a clear signal that construction firms anticipate a rebound in activity during the months ahead.

The seasonally adjusted IHS Markit/CIPS UK Construction Purchasing Managers’ Index® (PMI®) fell sharply from 51.4 in February to 47.0 in March, to register below the 50.0 no-change threshold for the first time in six months. Moreover, the latest reading signalled the fastest overall decline in construction output since July 2016. Where a drop in work was reported, survey respondents noted that unusually bad weather had disrupted staff availability and activity on site. 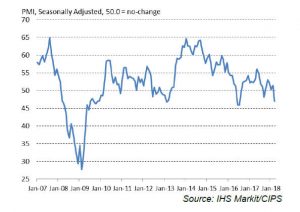 The overall reduction in construction output was driven by the sharpest drop in civil engineering work for five years in March. Commercial activity also decreased during the latest survey period, with the rate of decline the most marked since September 2017. Housing bucked the wider trend for construction activity in March, although the latest upturn in residential building was only marginal.

Construction companies indicated a decline in new business volumes during March, which continued the downward trend seen so far in 2018. The latest deterioration in new order books was the sharpest since July 2016. Survey respondents noted that subdued underlying demand and, in some cases, weather-related disruption had weighed on sales in March.

Despite a sustained soft patch for new work, latest data revealed that employment growth accelerated to a three-month high. Additional staff hiring was attributed to forthcoming project starts and long-term business expansion plans. At the same time, sub-contractor availability continued to decline, which contributed to the strongest rise in their average prices charged since September 2017.

Higher raw material costs continued in March, which construction firms linked to increased prices for metals and insulation in particular. Nonetheless, the overall rate of input cost inflation softened to a 20-month low. Some survey respondents cited a moderation in supplier price rises linked to the weak pound.

Meanwhile, construction firms indicated that supplier lead-times lengthened to the greatest degree since last July. This was attributed to a combination of stretched supply chain capacity, alongside transport delays following adverse weather in March.

“It’s a few years since the UK experienced such bad weather in March and it’s obvious that supply chains were woefully unprepared to deal with the disruption. So, though March’s figures could be viewed as a temporary blip, without a strong pipeline of work, and strong risk strategies in place, the sector’s health remains in question as we’re still a long way off seeing it operate the way it has over the last year.”

How to Become A Green Homes Grant Installer