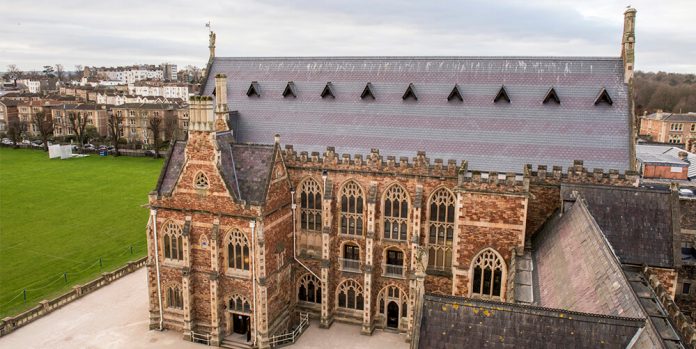 A total of 15,000 of Welsh Slate’s rectangular Cwt y Bugail and arrow-head Penrhyn Heather Blue slates now feature on the duo-pitch roof of the ‘Big School Kitchen’ at Clifton College in Bristol.

The three-storey dining hall/kitchen, which is one of, if not the biggest building in a cluster of stunning Victorian constructions, had not been re-roofed since it was built 156 years ago to a design by 19th century architect Charles Hansom.

And when a condition survey showed a refurbishment was required to protect the historic ceiling underneath, local planners insisted the roof slates had to be replaced like for like, with Welsh Slate.

They were also keen to see as much of the original slate salvaged as possible and around 1,000 slates were used to re-roof the lower-level ‘quad’ roof as part of a larger project to update the refectory facilities at the college which lies in a Conservation Area.

Architect Mark Webber, of Nichols Brown Webber LLP, said: “Any replacement slate had to be natural slate to match the original, in texture, colour, pattern, design style and slate type. The existing was Welsh therefore we needed to go with Welsh and they matched the existing perfectly. Cheaper imported slates would not have been acceptable to the planners and conservation officer.

“As it was such a large expanse of roof, the slate played a massive part in the project and the result is a beautiful and dramatic roof. Welsh slate is renowned for its durability and the roof may not be re-roofed for another 100 years or so, so had to last the test of time.”

The work included repairs to stone chimneys and replacement of all leadwork to match the existing. This took three months and was carried out by specialist roofing contractor M Camilleri and Sons Roofing who also introduced 50mm insulation boards between the rafters to improve the roof’s u-value.

The 1,000m2 of existing roof covering was stripped and renewed on a sectional phasing plan to maintain weather tightness and to ensure the ceiling inside was not left exposed to the elements.

One of the key aesthetic features of the original roof was ornamental banding of slates of differing colour and shape. To replicate this patterning, Welsh Slate’s Cwt y Bugail slates from Llan Ffestiniog and Penrhyn slates from Bethesda were selected.

The rectangular Cwt y Bugail Dark Blue Grey 500x300mm slates were used with four decorative bands within the roof, made up of five courses of Penrhyn Heather Blue 500x300mm slates which were individually cut to an arrow-head shape. All the slates were traditionally fixed with two copper nails into graded timber battens.

The roof features also included 20 dormers and a particularly long open rafter – over 10 metres – with lath and plaster ceiling boards underneath, as well as pitches of approximately 60° and significant amounts of lead detailing.

Marco Camilleri said, “It was imperative that the historic ceiling remained intact and was not subject to weather damage but the steep pitch and long rafter length were especially challenging to deal with, both in terms of materials distribution and providing safe access to undertake the work.

“Due to surrounding buildings and the height to roof level, vertical access for materials distribution was limited. The school was open throughout the contract period which also placed considerable constraints on access and deliveries.”

He added: “Welsh slates are widely recognised as the finest natural roofing slate in the world and the slates used on this project were, as expected, of the highest quality.”

The college’s estates bursar, Paul Williams, said: “We are really impressed with the quality of the materials and workmanship on our new roof and pleased that we were able to recreate the original design.”

Aerol, one of the college’s business enterprise groups, raised money for MacMillan Cancer Support by turning the old slates into drink coasters and cheese boards which were laser etched with the schools’ crest and sold at the prep school Christmas fair.

‘Made To Order’ Radius Gutter from Rainclear – True Cast or Mitred

T R Freeman Adds Another Tick to Their Education Portfolio